Part 3 of the rankings has us going through prospects 20-11. This is where they may be some contentious rankings, so again, if you disagree, don’t hesitate to let me know @steczar

One of the youngest players in the draft last year, eligible by only 5 days, former forward Phillips started the year in the USHL and racked up some ridiculous points through 16 games with 5 goals and 7 assists. Undersized at 5’11 and 175 pounds, Phillips then enrolled at the University of Minnesota for the spring semester as Minnesota was trying to generate more offense from their back end. Unfortunately, that didn’t work out as Phillips appeared in 11 games, scoring 0 points and seeing a few healthy scratches along the way. He will see a huge increase in time and deployment next year as he is the most senior LD on the roster for Minnesota. As to be expected with a former forward, Phillips is an offensively inclined defenseman, and he’ll likely grow into his frame a little more. At 5’11, he’s a little undersized, but if he adds 10-15 pounds, he’ll have plenty strength to hold his own.
Projected Role: PP Specialist Top 4 LD
Player Comparison: Vince Dunn

Blueger had an outstanding offensive year in WBS in the 17/18 season. Receiving no extended PP time, and being leaned on heavily for defensive work by Clark Donatelli, Blueger managed to score 45 points (21 goals, 24 assists) in 70 games, with 38 of those points coming at even strength. This outstanding season offensively for a primarily defensive player makes me have some doubts about whether I was too low on the offensive ceiling that Blueger possesses. His defensive game is already NHL ready, and has been since he turned pro, the Penguins are taking their time to squeeze every bit of offensive development they can out of Blueger. If the Penguins were struggling more at center, he’d have a good shot to make the opening night roster, but I don’t believe his offense will translate well. His skating, while not pretty, isn’t a hindrance to his ability.
Projected Role: Bottom 6 Defensive Center
Player Comparison: Matt Stajan

The Penguins have an awful lot of success with their 5th round picks (there’s 5 of them in my top 15) and 4 of those picks have come from European leagues. Olund is latest of those picks. Drafted after putting up a very impressive 15 points in 39 games in the SHL as a 19 year old, Olund followed it up with 23 points in 51 games and 5 points in 8 playoff games. Putting up that kind of performance as a 20 year old in a men’s league bodes well when you consider how advanced Olund’s two-way game is. He’s an incredibly unsexy player, but does everything well and won’t lose you a game. I don’t think there’s much of an offensive ceiling there, but he should be ready pretty soon for the NHL.
Projected Role: Bottom 6 Two-Way Center
Player Comparison: Nick Bonino

This ranking may rattle some cages. Jarry was, for some fans, considered the better prospect than Matt Murray even up to a year ago. While he possessed the higher pedigree, his development has hardly been a steady path and he regressed somewhat in this year. Perhaps as a result of him being shuttled back and forth from WBS to Pittsburgh, his performance in the AHL was far from stellar with a 3.05 GAA and a .901 sv%, being outperformed by an ECHL journeyman in Anthony Peters. Jarry was very good in 16/17, but the Baby Penguins were a better defensive team. Jarry’s NHL performance was fine, but nothing stellar. I have questions about his mental strength if the movement between the AHL and the NHL unsettled him as much as his stats would indicate. His 18/19 season is very important for his development.
Projected Role: Replacement Level Starter
Player Comparison: Thomas Greiss 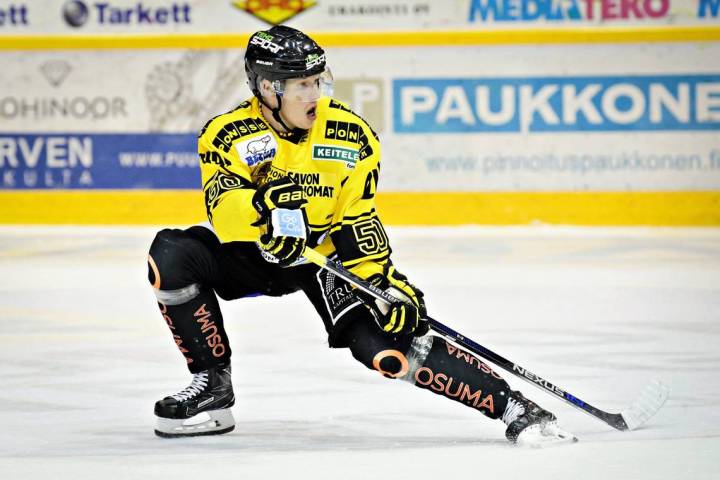 I already covered what you can expect from Riikola here, but a quick summary is that he’s been the top defenseman and alternate captain for a men’s team in the top Finnish league since he turned 22 and has been playing in the league since he turned 20. He also took the team to the cup finals in 16/17. He is arguably NHL ready already, but until we see him play some in the NA, I’m going to consider him a prospect. He’s a strong two-way player who may get more offensive chances in a more offensively inclined league.
Projected Role: Two-Way Top 4 LD
Player Comparison: Calvin De Haan 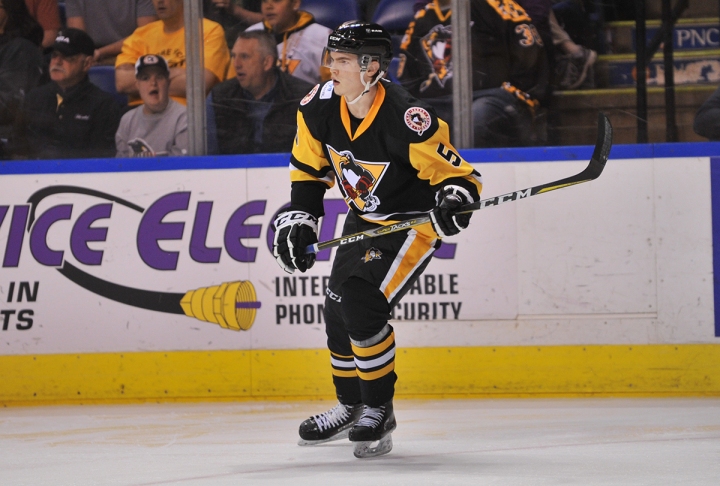 Another 5th round pick from Europe and another good prospect. Almari is a 20 year old who’s been playing in the Liiga since 15/16. Having added a significant amount of weight and getting up to 6’3, 210 pounds as per Penguins AGM Billy Guerin, Almari is poised to break out for HPK next year after playing between the 2nd and 3rd pairings this past season. A smooth skater, with good puck moving, he plays a game very similar to fellow Penguins and Finn Olli Maatta. Not especially physical, but willing to use his body to win the puck, expect Almari to break out a little bit offensively, although his team is not particularly offensively inclined. He did appear in a few games for WBS on an ATO to end the year, and was arguably the best player in the playoff game he did appear in. He would like to play in North America sooner rather than later, but with one year left on his Liiga contract, he’ll head back and finish it out.
Projected Role: Defensively Minded Top 4 LD
Player Comparison: Joel Edmundson

One of two prospects on this list who ended the year playing for the NHL club, Simon was an oddly polarizing figure in the playoffs. Many complained about his usage next to Crosby and bemoaned his lack of production, but underlying numbers show that Crosby played perfectly well with Simon (http://www.naturalstattrick.com/linestats.php?season=20172018&stype=3&sit=5v5&score=all&rate=n&team=PIT&view=wowy&loc=B&gpfilt=none&fd=2018-04-11&td=2018-06-04&tgp=82&strict=incl&p1=8478866&p2=8471675&p3=0&p4=0&p5=0). Perhaps it is a misunderstanding of what Simon is supposed to be that leads to the complaint. While he has some nice offensive seasons in the AHL, Simon is very much a complimentary piece who is there to win the puck for his linemates and then make himself available to finish a chance. He isn’t the most skilled player, but he’s skilled enough to work some passing plays with more talented players.
Projected Role: Complimentary Top 6 Grinder
Player Comparison: Joonas Donskoi 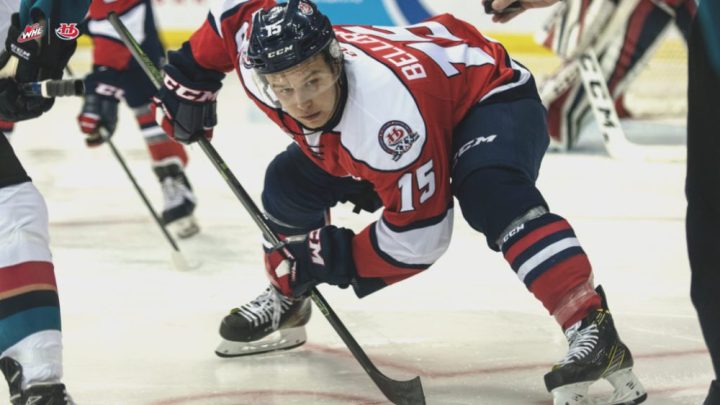 A player who has risen and risen through the Penguins pipeline, Bellerive got passed over in the draft in the summer because of his size. Listed at a generous 5’11, Bellerive didn’t really have the production that teams would salivate over from an undersized player. The Penguins then brought him to their prospect tournament as a try out and he played well enough to earn a contract. He then proceeded to score the 6th most points per game and the most goals of any player in their draft +1 year in the WHL. A stunning 46 goals, 46 assist performance rocketed Bellerive up the depth chart for the Penguins, even after Lethbridge moved their captain and top 6 winger halfway through the year. Bellerive then took on the captaincy and dragged Lethbridge to the semi-finals, despite Lethbridge having the 2nd lowest points total in the playoffs. Despite his size, Bellerive has shown plenty feistiness, taking on several opponents in fights who had 4-5 inches on him as well as racking up 82 PIMs on the year.
Projected Role: Two-Way Middle 6 Center
Player Comparison: Tyler Jonhson 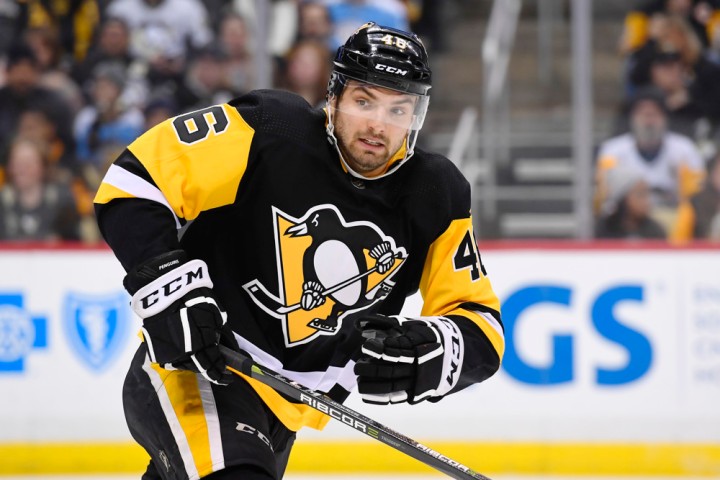 Rugged, physical and thick, Zach Aston-Reese made a name for himself in the NHL this year, scoring 6 points in 10 games just before the trade deadline before a shoulder injury sidelined him for a month. He unfortunately didn’t add much offensively before Tom Wilson lay a high hit on him that broke his jaw and ruled him out for the rest of the playoffs. Not particularly dynamic, Aston-Reese makes his living on the boards and in front of the net, finishing his checks and is not afraid to drop the gloves if needed. He’s capable of playing up and down the lineup as a result. He also adds penalty killing ability. Look for Aston-Reese to start the year on the 4th line and work his way up as he learns how to play physically on a nightly basis in the NHL. He’s never going to blow you away with skill, but he’s everything you want in a teammate.
Projected Role: Top 6 Complimentary Winger/Goaltender’s Nightmare
Player Comparsion: Patric Hornqvist

The crown jewel of the Penguins pipeline, it’s easy to forget that Sprong only turned 21 in March. Having been on Penguins fans radars since making the NHL at the age of 18 (a mistake, I have to add), Sprong has had several very good years in the QMJHL. His rookie year in the AHL was also outstanding. I must preach some relaxation of the expectations for Sprong as his even strength goals per game were eclipsed by Guentzel, Scott Wilson and Ryan Haggerty for the WBS Penguins in recent years and were closely matched by Dominik Simon. Given the Penguins PP having Kessel occupying the spot that Sprong occupied in the AHL, it’s unlikely he gets much, if any, PP time in the NHL for the Penguins. Despite fan clamoring for, the Penguins didn’t rush Sprong and rightly, they shouldn’t have, given his 200 foot game required some work, and still requires work. His board play is also weak. He does possess a lethal shot, however. I have questions on his ability to generate his own space for these shots, but a trigger man has use none the less. He must be on the Penguins in the coming season due to being waiver eligible. As such, the Penguins will need to move a forward off their roster to find him a spot.
Projected Role: 20-30G Sniper
Player Comparison: Thomas Vanek