There isn’t much to be said about Daniel Sprong that hasn’t already been said. A dynamic offensive forward with an NHL caliber shot, Sprong made the NHL team as an 18 year old in 2015-2016 before eventually being returned to the Charlottetown Islanders of the QMJHL and scoring 46 points in 33 regular season games and 15 points in 12 playoff games. Upon the conclusion of that season, Sprong then reported to the Wilkes-Barre/Scranton Penguins for their playoff run at scored an incredibly impressive 5 goals and 2 assists through 10 games.

His 2016-2017 season got off to a much less successful start, having had offseason shoulder surgery. When he recovered from this in January, he returned to Charlottetown and got off to what was considered by some to be a slow start, managing 5 goals and 11 points through 11 games in January. Sprong then made plenty use of his NHL level shot, scoring 14 goals in 11 games in February and 12 goals through 9 games in March, for an overall regular season tally of 32 goals, 27 assists through 31 games. Sprong added to this with 9 goals and 11 assists in 12 playoff games. However, due to WBS’ first round exit, he never had a chance to contribute to their playoff run.

Sprong recently shined at the Penguins 2017 Development Camp, being placed into a leadership role by Director of Player Development Mark Recchi and was the name on the lips of the Penguins’ Hockey Operations department and the spectators who went to see the camp. While his name has been floated about to make the NHL roster out of camp, with the Penguins having 5 waiver eligible LW and 5 waiver eligible RW, it’s unlikely to be the case. Expect to see Sprong taken on the Jake Guentzel development path of being kept in the AHL while they offensively dominate the league, and then being brought up. WBS fans will have to treasure the brief amount of time they see Sprong, as I strongly suspect he won’t be there after January provided he shows the improvements to his 2-way game that have been talked about by the Penguins’ development staff.

A free agent signing from Northeastern University where he was a Hobey Baker Trophy nominee in his senior year, Zach Aston-Reese was a highly sought after commodity with practically every team having an interest in having him sign. Perhaps owing to the Penguins track record of developing NCAA prospects, Aston-Reese chose the Penguins over pretty much every other NHL team and signed a 2 year ELC that starts for the 2017-2018 season and an amateur try-out that allowed Aston-Reese to contribute down the stretch for Wilkes-Barre/Scranton.And contribute he did, scoring 3 goals and 5 assists in 10 games while playing on a scoring line with Kevin Porter and WBS legend Tom Kostopoulus. An incredibly versatile player, Aston-Reese can play in all 3 forward positions, on the powerplay and on the penalty kill. He also plays an extremely gritty game, as demonstrated by this clip:

Projecting to be a Patric Hornqvist type player with a relentless forecheck and an insatiable desire to win, Aston-Reese will likely start in WBS for the same reasons as Sprong in that there is a log jam of wingers on the NHL roster. This will only serve to benefit Aston-Reese as he develops his skating. Expect to see Aston-Reese as one of the first call ups in the case of injuries and will likely be skating in an offensive role for the Baby Penguins until that happens.

A 2nd round pick all the way back in 2012, Teddy Blueger is a defensively minded center who played his first professional year in the 2016-2017 season. While his defensive and faceoff game is likely at an NHL level, the Penguins felt the best thing to do was to allow him to play down in Wilkes-Barre and develop his offensive game. While down in WBS, Blueger showed his play making ability, scoring a respectable 7 goals and 24 assists through 54 games.

Blueger will never be mistaken for a dynamic offensive player, but that was never his game, even when he was drafted. A perfect example of a low ceiling high floor prospect, Blueger could likely come up to the NHL and play in a 4th line, defensively minded role at this moment. However, the Penguins will likely have him spend another year in WBS primarily to hopefully further develop his offensive play. Given the Penguins lack of C depth (and the ever elusive 3C not yet acquired), I suspect Blueger will see a good amount of time in the NHL if there are injuries to centers.

Limited to just 16 games in his first year in North America due to what was eventually discovered to be Postural Orthostatic Tachycardia Syndrome, a condition that causes a plethora of symptoms, but has a favourable prognosis once treated. Having been shut down for most of the year, Lukas Bengtsson has been working out back in Sweden having received treatment which bodes well for his ability to play next year.

As expected by his size, he is an offensively minded D with great skating and transition play. If he remains healthy, he will the best defensive prospect in WBS by far. Fitting the Penguins system to a tee, if Bengtsson will likely see some time with the NHL team and will show the skills and talent that had the Penguins salivating when they managed to beat the Rangers to his signature last offseason. A name to keep an eye out on the WBS score sheets. 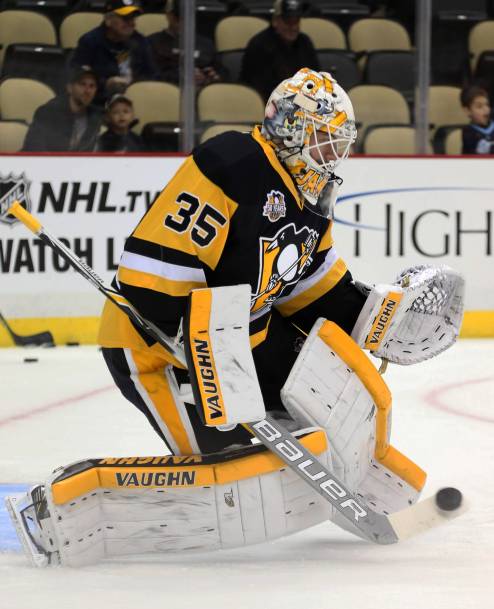 Putting up a very impressive .925% and 2.15 GAA in his second pro season, Tristan Jarry is only not in the NHL as a result of the team wanting him to start more games. As a young goaltender, games are the key thing to development, and allowing Jarry to remain in the AHL is something that was key to the Penguins acquiring Antti Niemi as their backup to Matt Murray in the NHL.

Jarry is in a similar vein to Murray, along with most young goalies in the NHL, in that they have great fundamentals in the butterfly and play a reserved style. If Niemi struggles, or there’s any goalie injuries, Jarry will be up in the NHL, likely starting if he is called up for injury. Look for him to develop his tracking of the puck in the AHL and also when he gets up to the NHL.

One thought on “5 WBS Prospects Who Will See NHL Time”